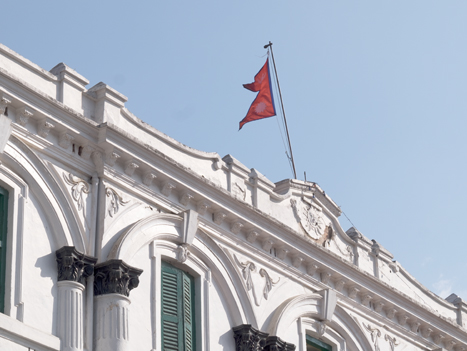 Nepal is a small yet extremely geographically, culturally and ethnically diverse country. The country has very fertile plains, subalpine forested hills and hosts eight of the world’s ten tallest mountains, including Mount Everest, the highest mountain on earth at 8,848 meters above sea level. The country is made up of 26.4 million people, of which the majority lives in rural area. Kathmandu is the nation’s capital city. The Nepali people are descendants of migrants from parts of India, Tibet and parts of Myanmar and Yunnan. It is a multicultural, multilingual and multi-religious country.

The country experienced a civil war between the Communist Party of Nepal (Maoist) (CPN-M) and the government of Nepal between 1996 to 2006. After ten years of violent, armed conflict, a peace agreement was signed between the parties in November 2006. Since then, the country has made efforts to become a democratic republic, but the road towards stability continues to be challenging.

In April and again in May 2016, Nepal experienced a devastating earthquakes that had a huge impact on people’s lives in the country. The reconstruction process has been extremely complex and is still in its beginnings, with a lot of humanitarian aid unable to reach the most affected people.

Prabina supports vulnerable children and youths from diverse backgrounds. Many of the Prabina children and youths come from poor family backgrounds, and are from casteless and marginalized groups who migrated from the highlands facing discrimination within Nepali society. Some of them are orphans with nobody to care for them. Others come from areas where they fear to be the victims of child trafficking. Child trafficking to India and the middle east has increased in the aftermath of the earthquakes. 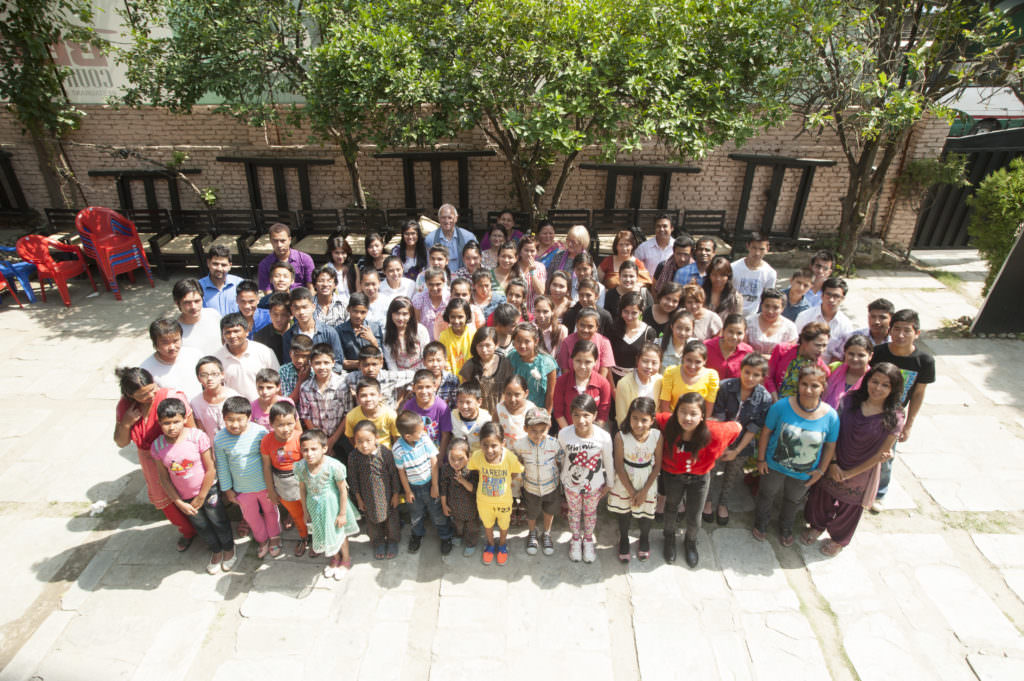 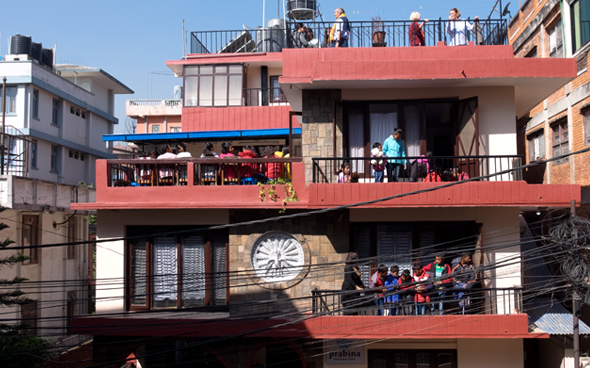 Prabina Foundation aims to ensure a safe home for vulnerable children and youths in Nepal in a number of ways. Efforts are made to ensure that children and youths stay with reliable family members when possible and helps to find alternative boarding options when necessary. Prabina house for girls in the center of Kathmandu provides a home for vulnerable girls who either do not have a family who they can live with or whose family is not able to care for them. In addition, it is a space for all Prabina children and youths to meet, grow and learn together. Currently, Prabina Foundation is in the process of developing a Prabina house for boys in order to provide a home space for those boys who require additional care and support. 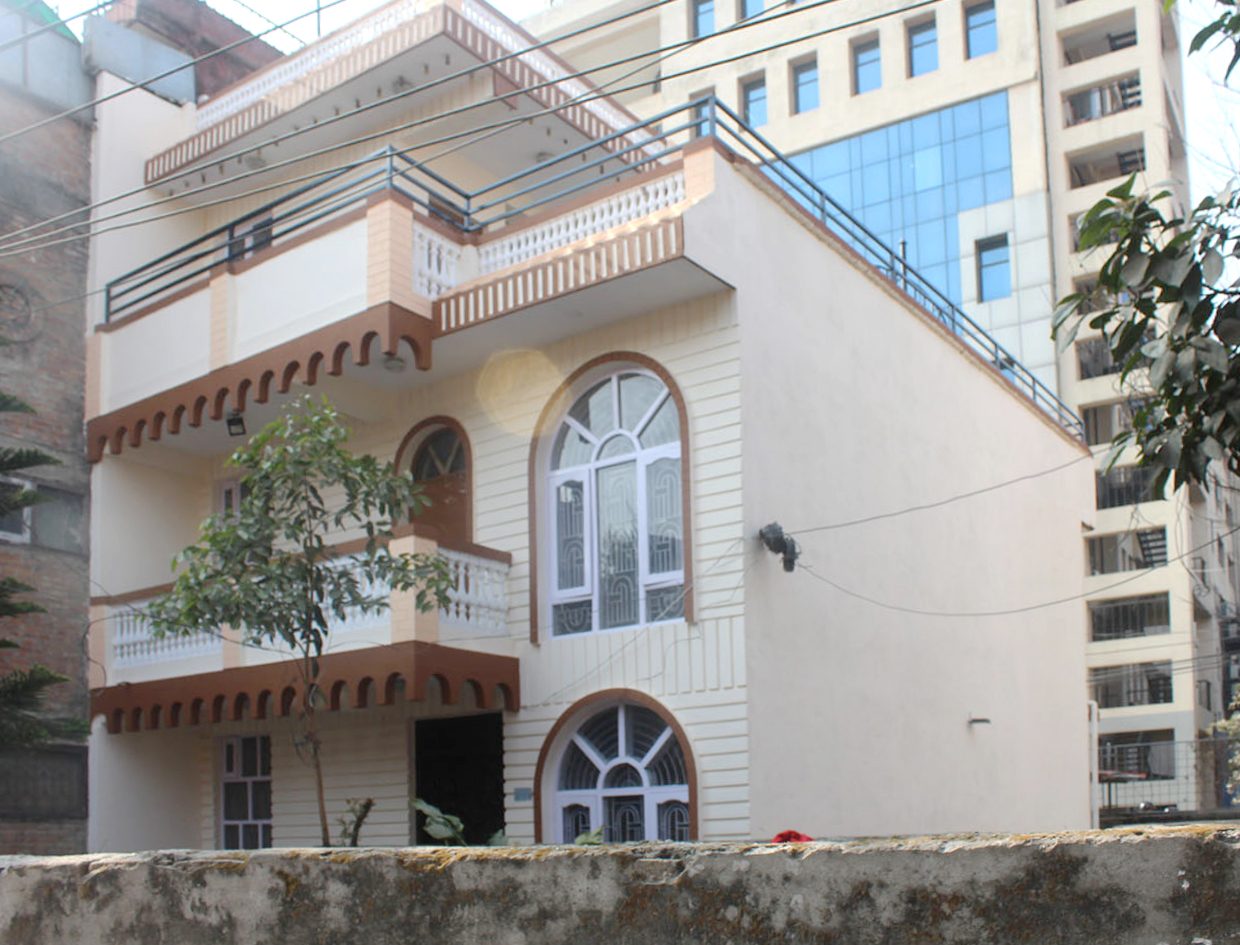 Prabina Foundation has launched a project and fundraising campaign to establish a Prabina house for boys. This aims to nurture a home space for those boys who require additional care and support and who do not have family they can live with or whose family is not able to care for them. Prabina Foundation is thankful for the donations it has received from individuals and organizations for this cause and welcomes further donations in order to ensure a sustainable living environment can be created for
vulnerable boys.

A typical week at Prabina House 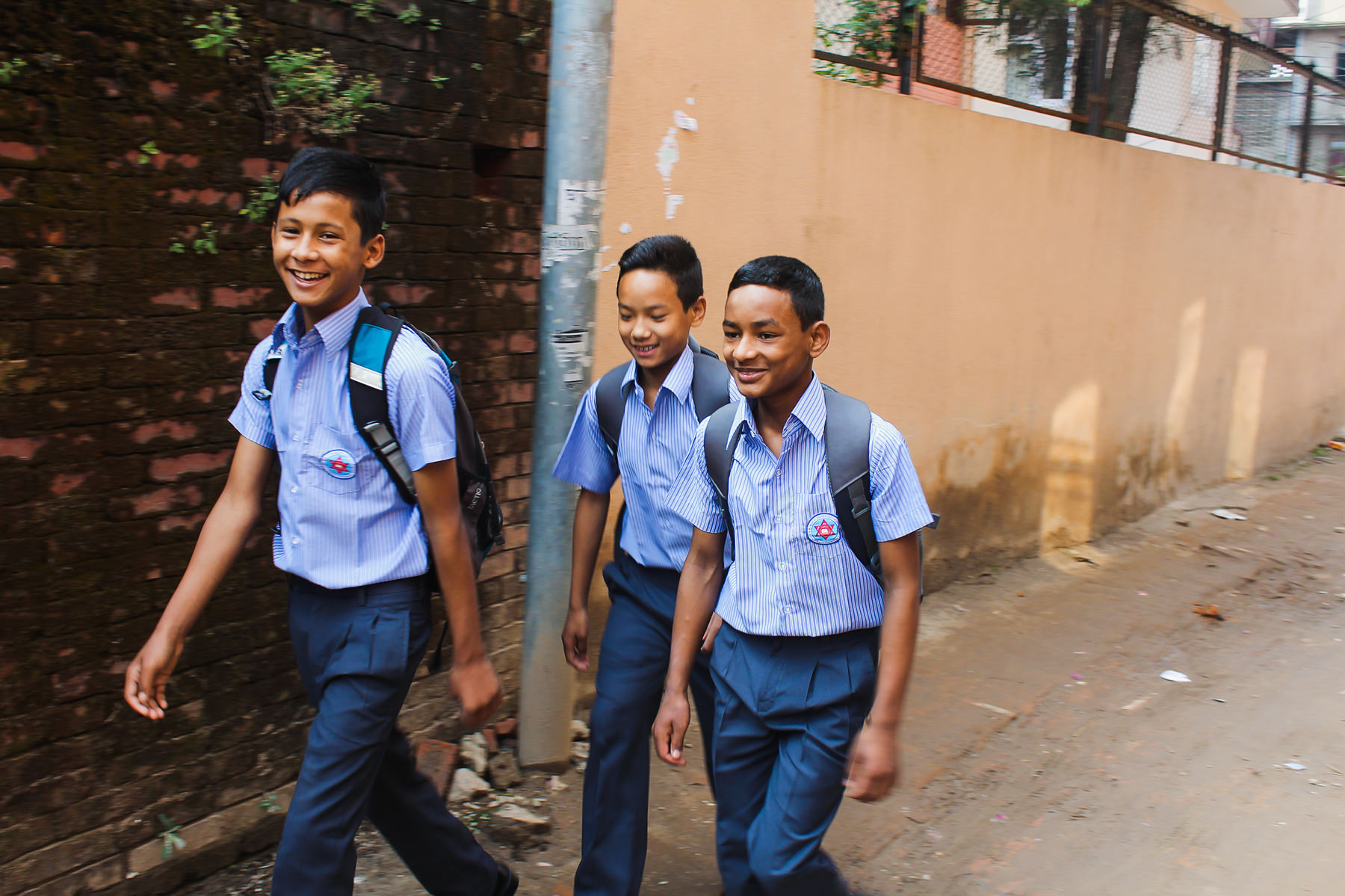 Prabina Foundation has designed a daily routine in order to help the children and youths who live in the Prabina house to have a structured schedule that promotes good habits and discipline. 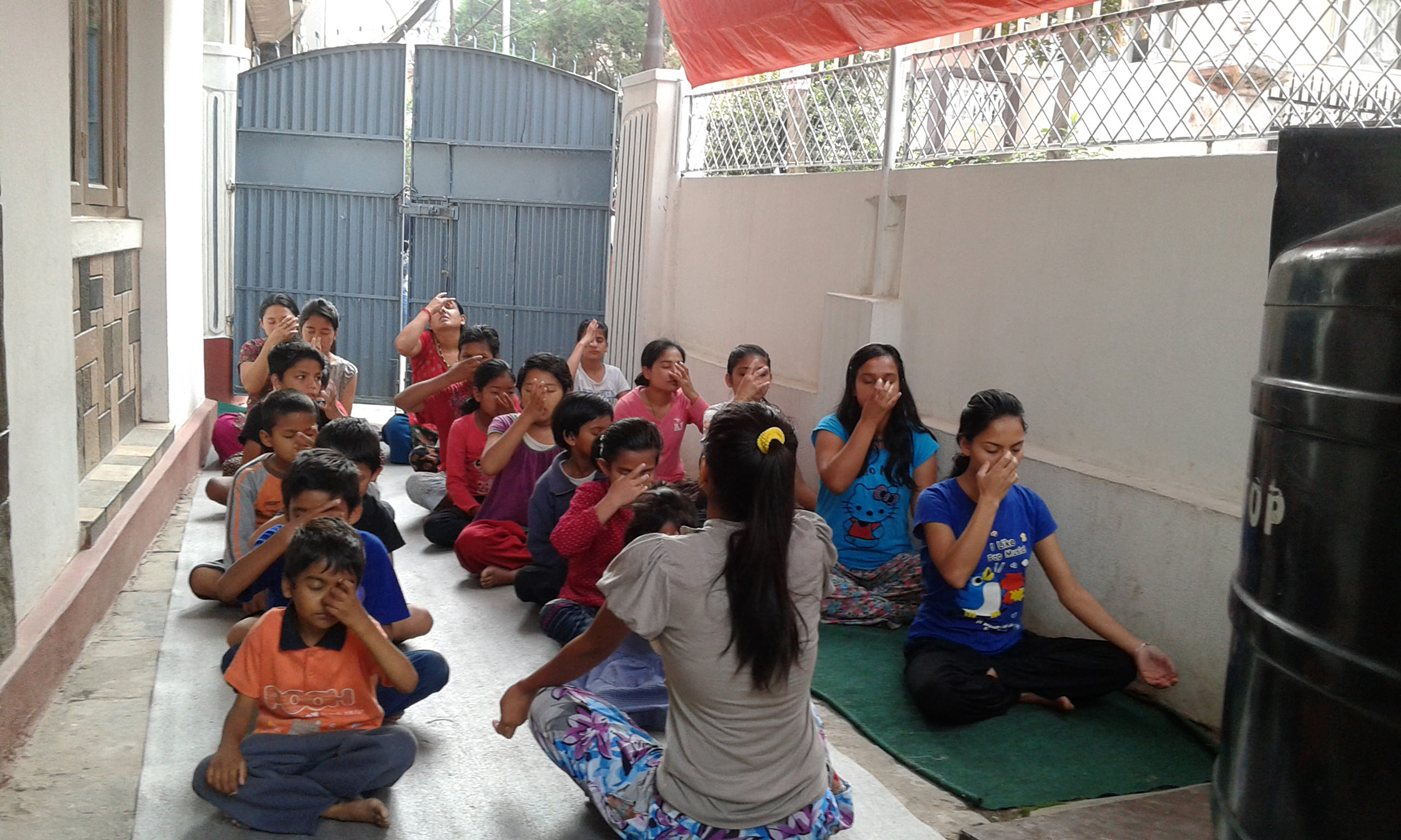 Each morning, the students wake and freshen up around 5:30am and have the option to do yoga at 6:00am. They all have their morning tea and then have time to study and prepare for school from 7:00-8:00am. Everyone then has breakfast together and at around 8:30am, the students leave for school. While at their respective schools, they usually have lunch around 12:00pm and come back from school around 4:30pm. 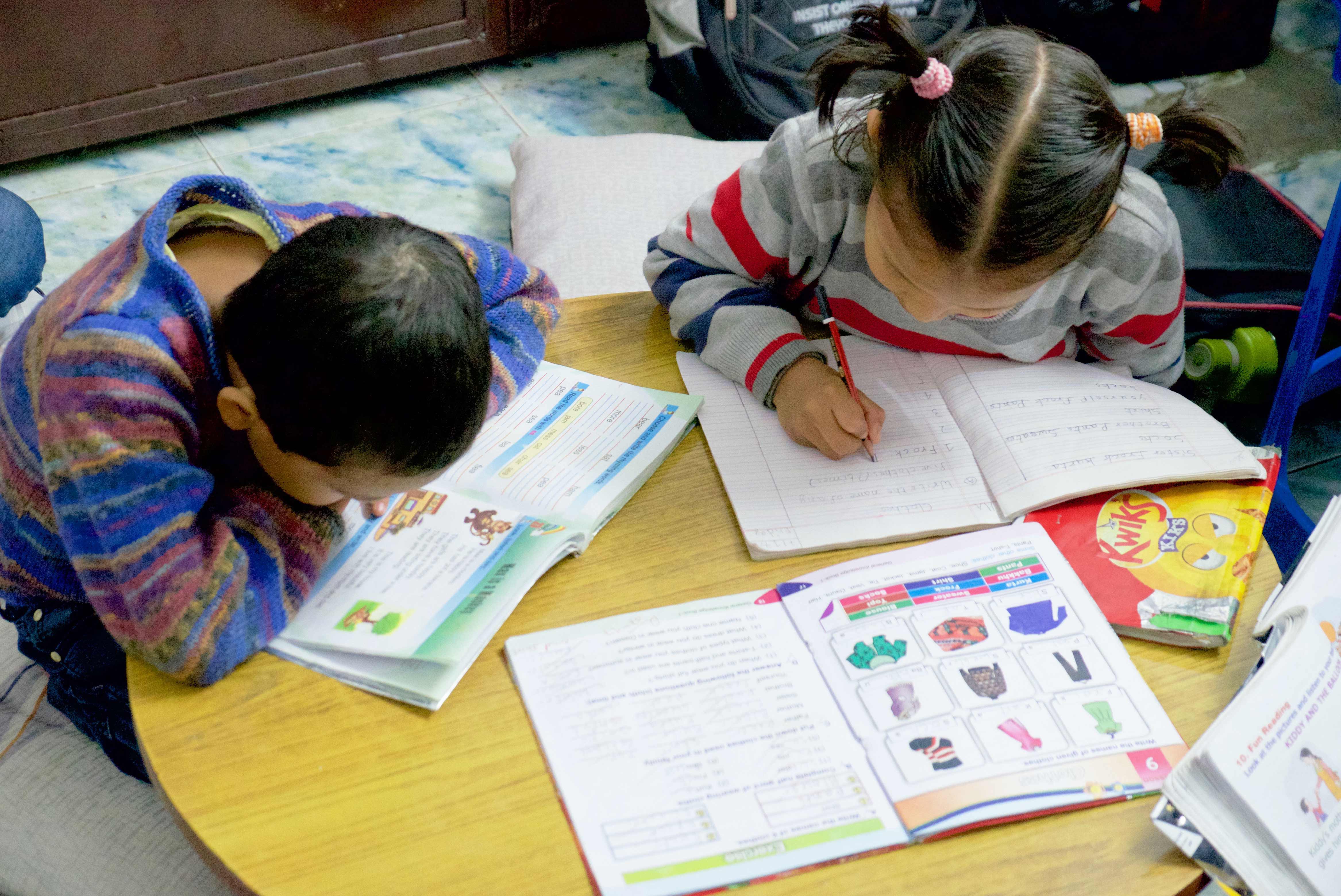 Back at Prabina house, they first have snacks and games, and then at 5:00pm, they have study time with the support of Prabina staff until dinner is served at 7:00pm. After dinner, the students have some leisure time and then at 8:00pm, they dedicate another hour to self-study to complete any further reading or homework. At 9:00pm, it’s time to go to bed. 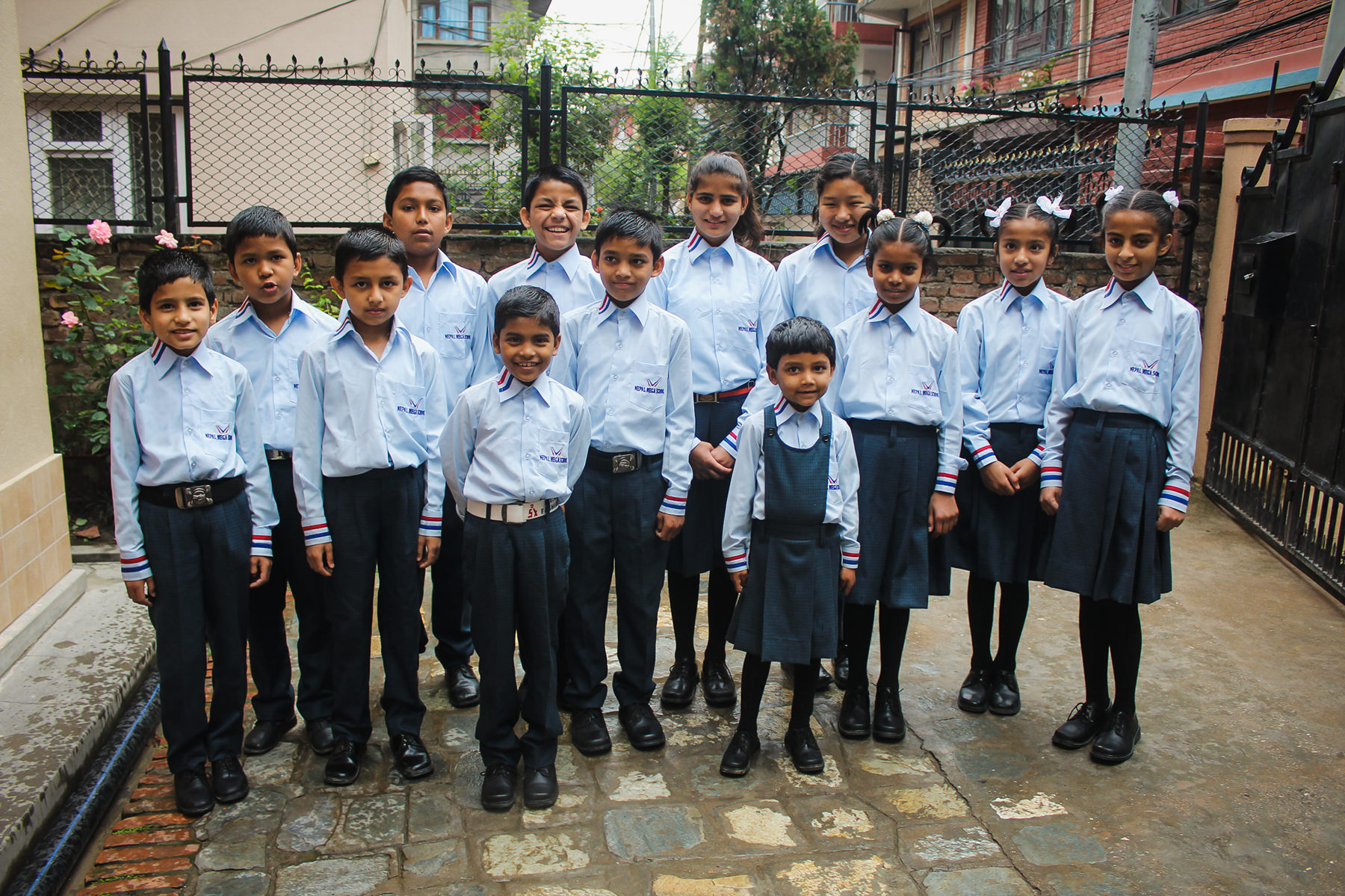 On the weekends, there is space for study and learning, but also for socializing, playing and extra-curricular activities. Wake up is at 6:30am and starts with freshening up and a yoga option. Breakfast is served at 7:30am and then students have the chance to study and do their homework. At 9:00am, everyone helps to wash and clean the Prabina house. Lunch is served at 10:00am and then students have time to have their baths and rest. In he afternoons, from between 12:00-3:00pm, Prabina Foundation organizes different outings such as going to the movies, going on an excursion, getting a bite to eat, etc. 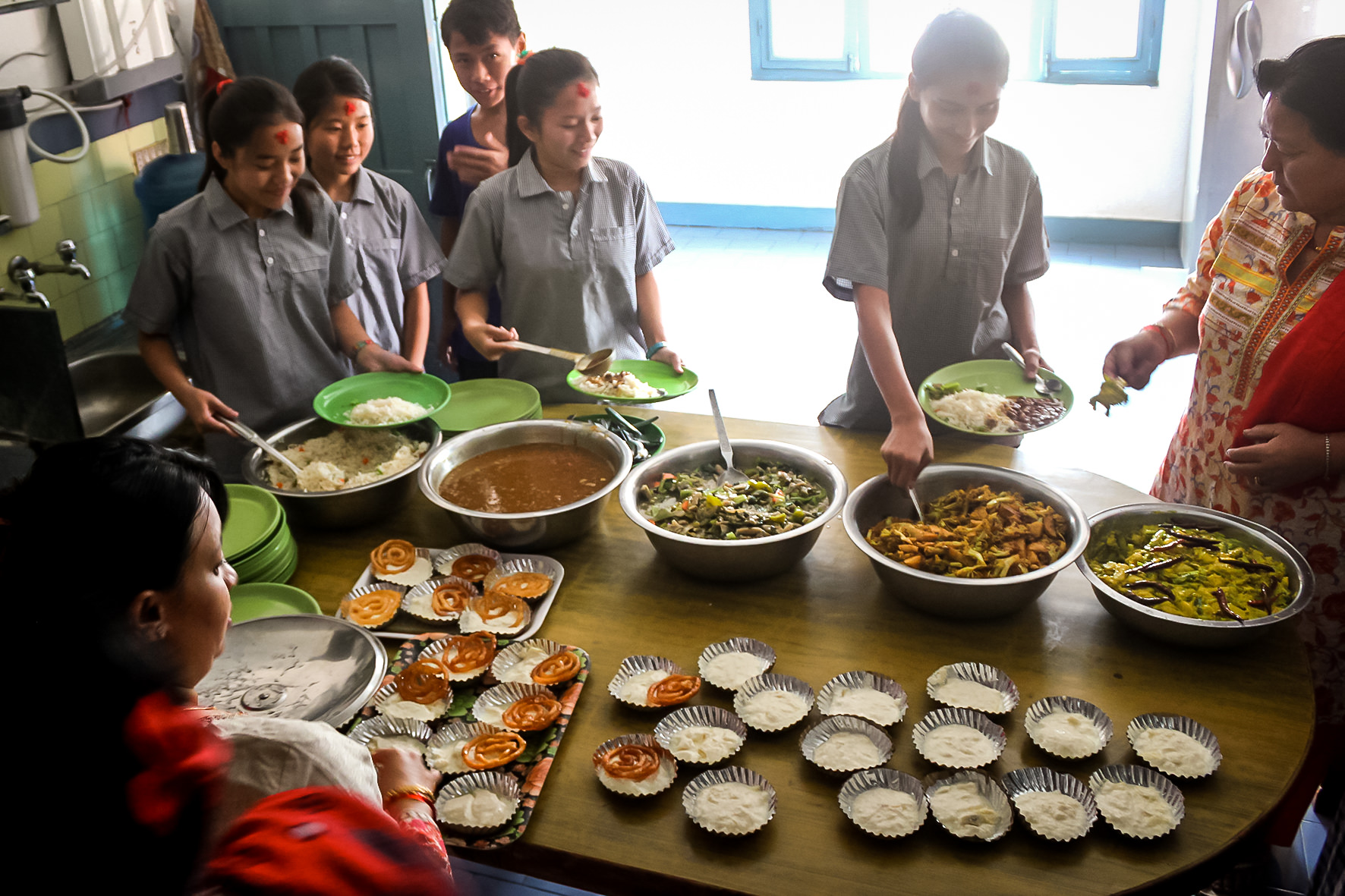 At 3:30pm, students engage in outdoor games to promote sports, leisure and being together. Common sports are basketball, football, badminton and table tennis. Sometimes, they go together for hikes to nearby areas. At 5:00pm, there is a period of rest and then some time for self-study before dinner is served at 7:00pm. Children and youths can often be found at our internet café chatting or writing emails to their sponsors. After dinner, there is time to prepare for the next school day and have some leisure time. At 9:00pm, it’s light’s out. For those students who do not live at Prabina house, they are welcome to join for these weekend activities and excursions. 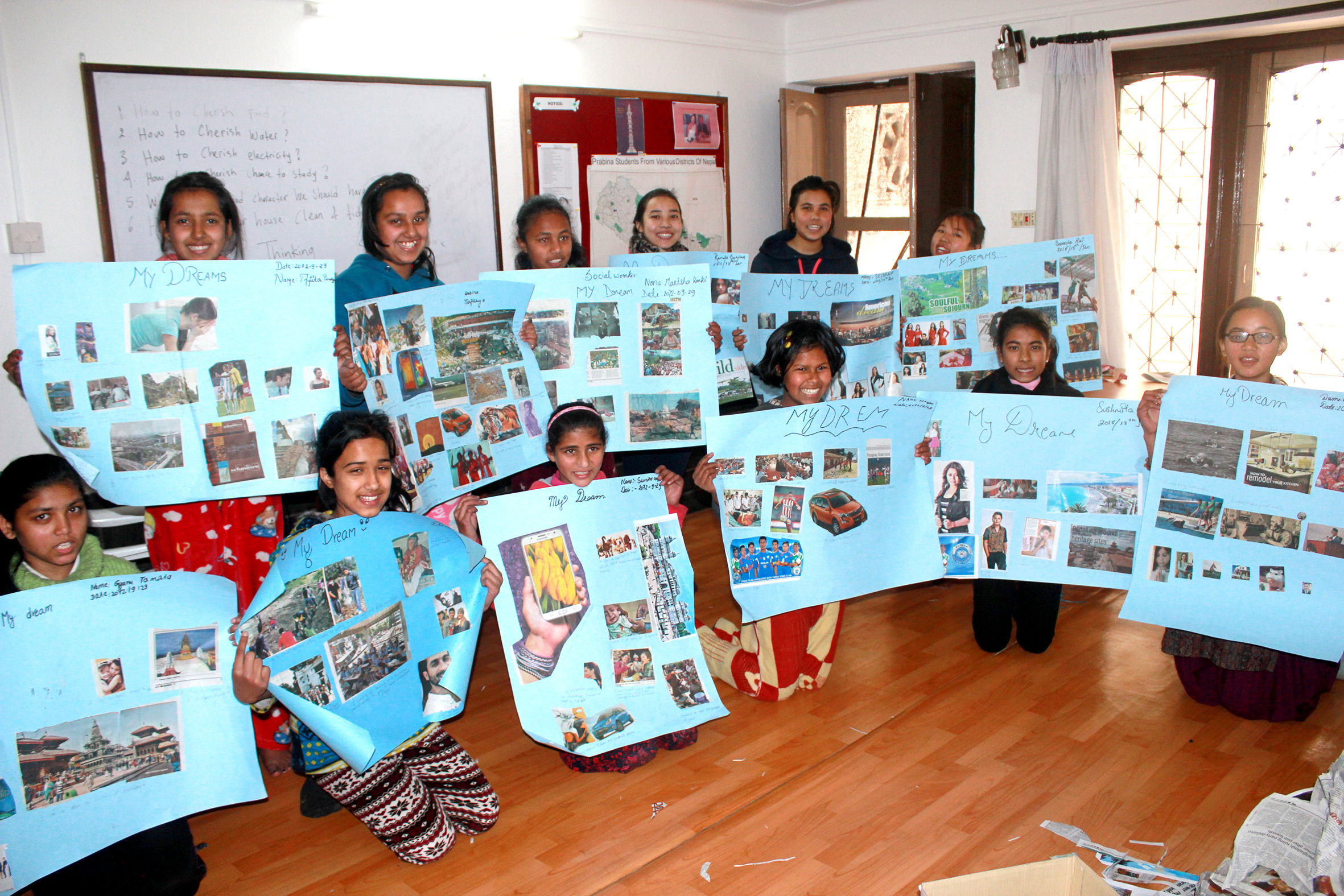 During long weekends, semester breaks and holiday periods, Prabina Foundation organizes a number of additional activities for the students to support learning but also to have time to grow and play together. For example, recreational excursions are organized to amusement and water parks, the central zoo in Kathmandu, a children’s fun park, visiting temples, museums and monasteries, or going together for a picnic. Sometimes a bigger trip is organized to visit other cities. 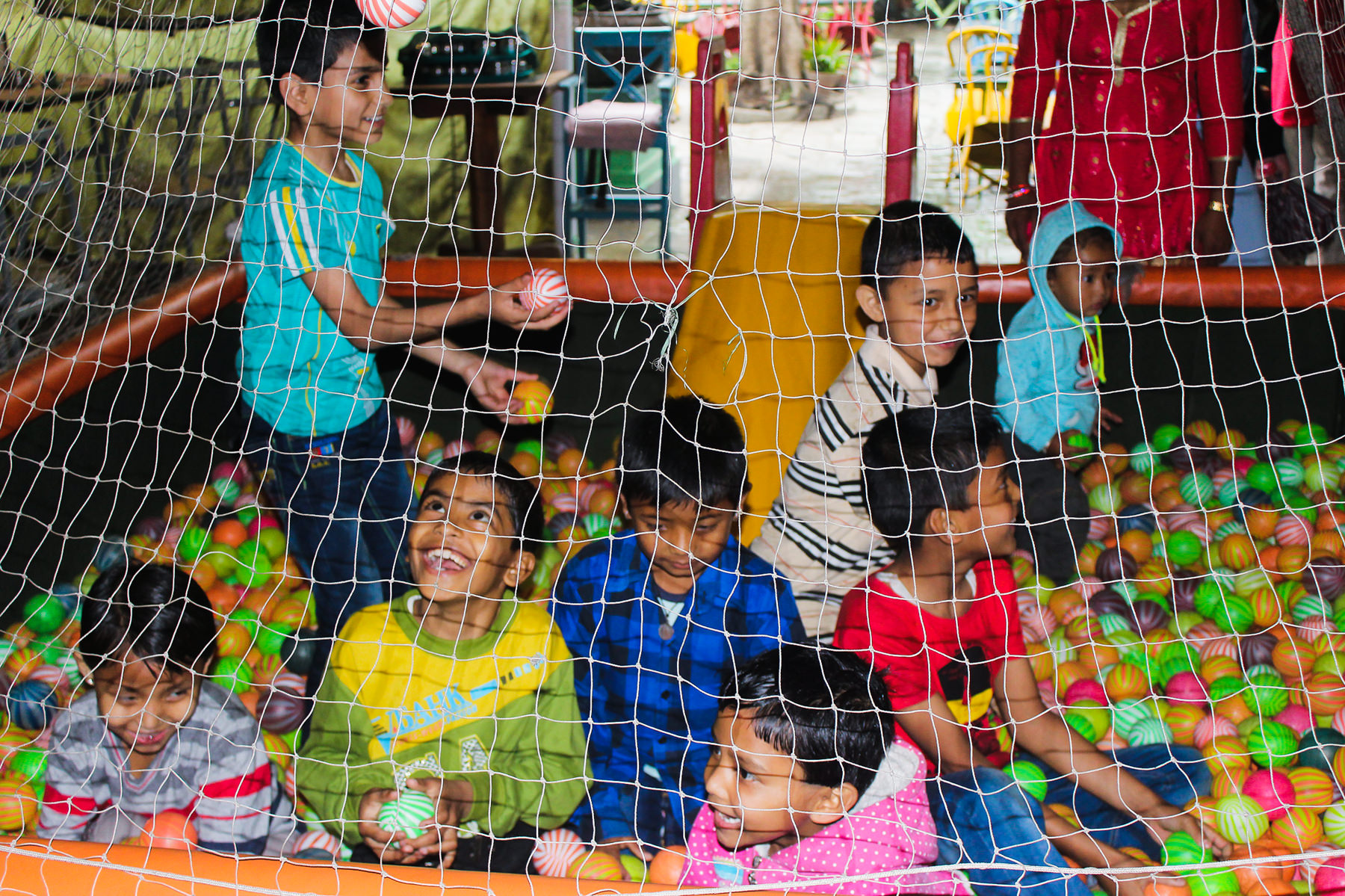 Other times, they go to the movies or play indoor games. In addition, different kinds of creative classes are organized on topics such as dance, moral and motivation, drawing and painting. Prabina Foundation offers additional skills development classes such as basic information technology (IT) classes on computers, typing, email, internet and web design. Counselling services are also provided to students depending on their needs such as career counselling, personal coaching and psychological counselling. All sponsored Prabina students are able to benefit from these extra-curricular activities and classes regardless of where they live. 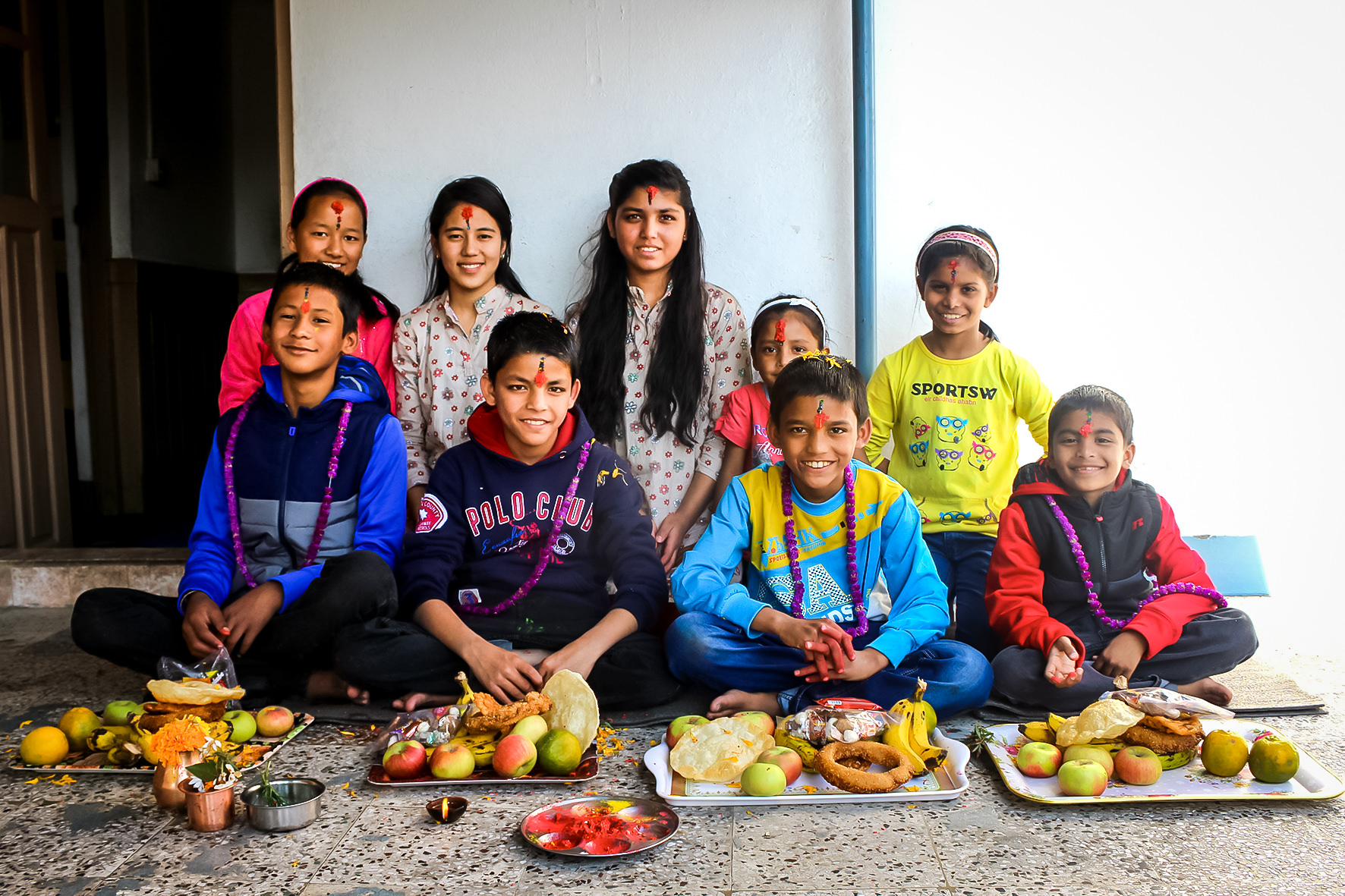 Every year, a Reunion of our big Prabina family is conducted on the first day of the Dashain Festival (Ghatasthapana) – the celebration of the victory of good over evil. On this day all the current and past Prabina students are invited to Prabina house where they are offered a Dashain grant and are treated with a special celebration feast.